N.V.A’s “God of Carnage” by Yasmina Reza, is played out in black and white with splashes of primary colors to liven up the discussion. It is now showing at New Village Arts Theatre through Nov. 13th and it is a nail bitter from start to finish.

Translated from French to English by Christopher Hampton, it was awarded a Tony for ‘Best Play’ in 2000 and to this day elicits reactions that almost mirror our political atmosphere. Looking in at it through tunnel vision, four seemingly intelligent adults get into a cat scratching battle over an altercation between their children.

As the play opens we find ourselves, along with the Raleigh’s, (Manny Fernandes and Kristianne Kurner) in the upscale living room flat of Veronica and Michael Novak. (Melissa Fernandes and Jeffrey Keith Jones). They are smack dab in the middle of a conversation.

Here is what we are privy to:  The Raleigh’s eleven-year-old son Benjamin hit the Novak's son Henry in the face with a stick and ‘broke two incisors, including injury to the nerve in the right incisor’. It all happened in the upscale Cobble Hill Park that is supposed to be a safe haven for children to play. Everything looks and sounds civil.

Veronica went to great lengths to provide Alan and Annette Raleigh with the facts of what happened to her son and to ask the Raleigh’s if their son, Benjamin, might apologize. They could meet at their place. After all, says Veronica, “This is the art of co-existence.” Bring the two together, say the mandatory apology and show them the ways of their errors.

When the Raleigh’s agree that, of course Benjamin ‘has to apologize’, one would think that the matter was settled even though Alan doesn’t seem to think that the children, or at least his son, has yet to master the ‘art’ of co-existence. But they all agreed to a meeting nonetheless.

Small talk follows and a funny thing happens just before the couples part company. All agree that more clarification might be needed.  The Raleigh’s turn back into the living room for more talk. They share a bit of food (clafouti with gingerbread crumbs), coffee and booze.

The discussion takes a turn and branches off into small talk beyond anything having to do with the two eleven year olds (how about hamsters?). Suddenly, an almost civilized meeting turns into street warfare with verbal bombs dropping in the most unlikely of places with the almost complete destruction of everyone’s egos, not to mention the neatly appointed Novak apartment. They will see their beautifully appointed living room turn into a WWIII battleground by plays end. 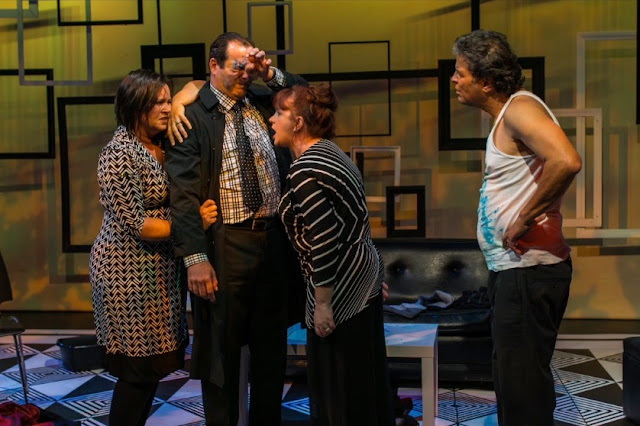 One knockout punch after the other makes every verbal confrontation an episode. Every episode vibrates. The echoes from those vibrations have enough cringe value to make you squirm or LOL. You pick your weapon. It’s as tragic as it is scathingly funny and the NVA cast makes the most of it.

Both couples seem likeable enough yet would never be destined to become known to each other but for their children’s actions.  Melissa Fernandes’ Veronica is the alpha female of the Novak’s.  She has a book coming out about the tragedy in Darfur and she contributed to a collection on the ‘civilization of Sheba’. Fernandes is on top of her game here as the center of gravity where everything more or less revolves around her.

Michael owns a domestic hardwood store and is deep into plungers, doorknobs and fondue pots (especially around Christmas). Jones plays the laid back easy-going (on the surface), rather pleasant and almost disinterested contestant in this game and for a time goes along with his wife when he suddenly turns ballistic and then…watch out! 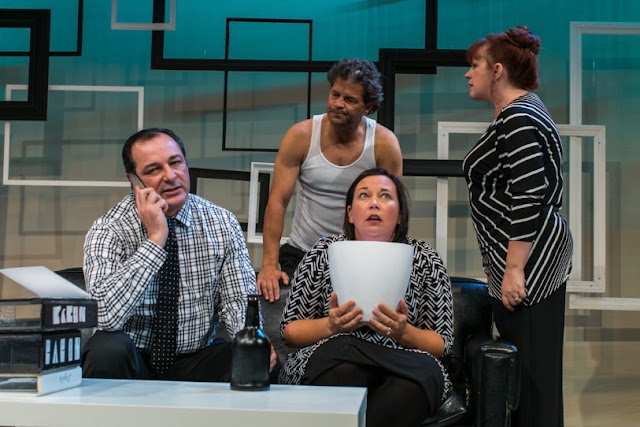 Fernandes as Allan Raleigh, a corporate lawyer addicted to his phone, struggles to put out fires for the big pharmaceutical company that he represents, in doo doo with the press. Fernandes looms as larger than life over the others while giving his legalese on the phone. As an active participant in the behavior or misbehavior of his son, he’s not so convinced that he and his wife should be there.

Kristianne Kurner’s Annette appears more baffled and bewildered at being called to such a gathering but willing to go along with the fact that an apology is needed. Unfortunately she turns the Novak living room into a stinking mess after her stomach can’t seem to take the rowdiness she hears in her brain.

She deals in money matters. At times tries to hold things together but literally looses it and throws up over the entire group including her husband. The ‘party’ turns to mayhem. They stare at her in awe and practically fall all over each other trying to clean up the mess she’s left behind. That includes the ruination of one of Veronica’s out of publication books and the destruction of Alan’s cell phone that turns into a bright yellow blob of dripping goop. Once that prop is gone, he too goes gooey.
Kristin Flores designed a beautifully coordinated black and white set that is stunning to the eye. Elisa Benzoni designed the black and white outfits on all four to hammer away at the black and white attitudes of them all. This visual sends a powerful statement to the one or the other attitudes so now prevalent without uttering one word. I loved the look. 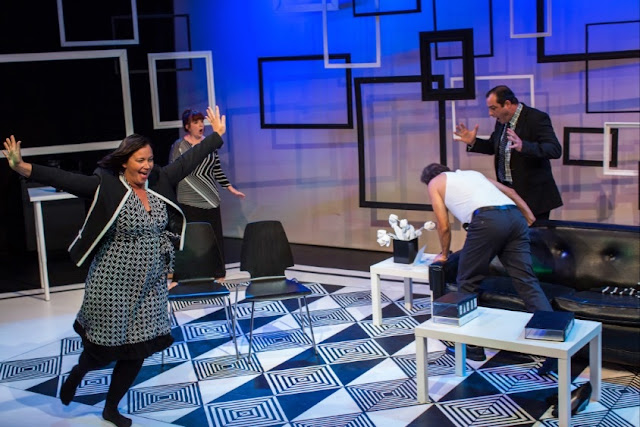 I read somewhere that the play is “brutally entertaining”. I might add, riotous. Best of all, director Jessica Bird knows how to squeeze, from her excellent cast, the most out of the verbal and non-verbal absurdities that characterize this viciously funny play.