For the “Forever Plaids” their return to the north county is a welcome holiday treat.  The show plays through Dec. 31st at The Welk Resort Theatre in Escondido and would be a great way to usher in the New Year. It’s fun, easy, and worth the drive north.

Just as a short trip down memory lane the musical “Forever Plaid” started at the Old Globe waay back in 1991. The off- Broadway musical comedy, written by Stuart Ross hit New York in 1990 and became an instant success with follow up shows like “Plaid Tidings” and “The Sound of Plaid”: Forever Plaid School Vision” (a version for high schools) and  “Forever Plaid: The Movie”.

For San Diego historians, “Forever Plaid” was the longest running production (1996-2001) at the Theatre in Old Town then managed by Miracle Productions run by Jill K. Mesaros and Paula Kalustian.

Since 2008 Cygnet Theatre Company is housed in the space. Artistic director Sean Murray is now producing and operating the theatre with more diversity, producing shows on a regular basis.  Back in 1996 a trip to Old Town without seeing ‘The Plaids’ would have been a like missing a relative you like.

Speaking of taking trips back, that’s the premise of Stuart’s “Plaids” musicals. Corny as it may seem, four high school friends Jinx, Smudge, Sparky and Frankie formed a little harmonizing group and practiced every day after school and work. They practiced in the basement of one of the guy’s dad’s businesses until they landed their first gig. (I’ll let them tell you about that)

None of the boys survived and all went to heaven or wherever it is that singing groups go in the hereafter. As fate would have it, they get one more chance come back to do the show ‘they never got to do in life’.

On this one foggy night the Plaids return to earth to get one more chance to fulfill their dream. This time however, (as opposed to the Very first time) their return is around the holiday season and that’s how “Plaid Tidings” was born.

Enter Jinx (Luke H. Jacobs), Smudge (Chaz Feuerstine), Sparky (JD Dumas) and Frankie (Bryan Banville) carrying but one suitcase and lighting their way to the stage, one candle. They are still surprised to be back on earth and can’t get over their luck in being back on earth. WOW!

Keep in mind the accident happened in the 50’s when singing groups were all about, well singing groups like The Four Lads, The Four Aces, The Four Freshmen, The Drifters, The Lettermen and the list goes on. Television was all about The Ed Sullivan Show (They do a very clever fast track roundup of Sullivan favorite guests) and favorite crooner Perry Como’s ‘Dream along with me…’ was a password to great entertainment.

More than the corn of the story and how it all came to be (which is narrated and poked at throughout), the music is the heart of this show. If you are anything like yours truly, the music of the 50’s and 60’s is at the heart of my being. I love the music, the harmonizing, the schmaltz, and the fun of... the everything. In fact, I could hum (very quietly) every one of the songs.

I don’t think, since the original Old Town days that I’ve ever seen a bad “Plaids”. This production is no exception. The lads or Plaids currently performing at the Welk Resort Theatre are in perfect harmony, have tons of experience in musical theatre and they are just plain fun to watch as well. 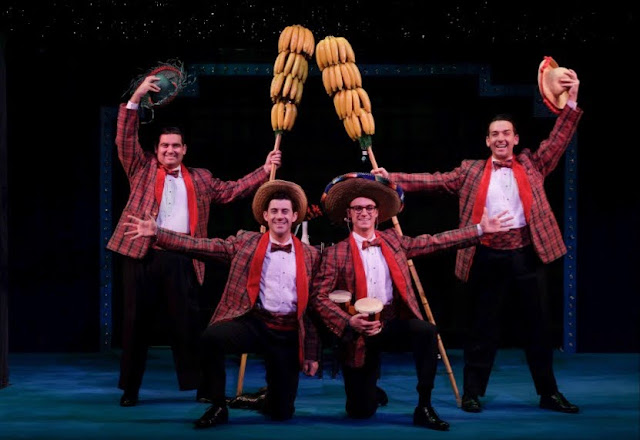 Feuerstine’s Smudge is as clumsy and nearsighted as ever especially without his specs. He’s also quite charming and his voice stretches wide ranges making him somewhat unique to the group. JD Dumas is great as Sparky the trickster. Keep an ear out for his voice as well.

It’s difficult picking out favorites but what comes to the top are “Stranger in Paradise”, “Mambo Italiano”. “Matilda” (be prepared for audience participation), “Moments to Remember”, “Hey There”, “Mixmaster Christmas” and “Twaz Tha Nite Be4 Xams” (a hoot). All four have tons of showmanship under their belts and the afternoon I saw the production was no exception.

The show sailed along at a nice pace. It looks exactly like every other Plaid show with direction and musical staging by Stuart Ross. David Humphrey directs and choreographs this particular one. The show is very well choreographed up to and including every hand movement.  Humphrey has appeared in one or another Plaid version of the original more times than I could count on his credits.

Jennifer Edwards lighting if right on, as is Patrick Hoyny’s sound. No credit is given for the projections, but they really go hand in with both lighting and sound designs. They enhance the storybook fable and even entertain during intermission with a General Electric commercial introducing a GE iron showing how easy ironing is with GE. Now that’s a real blast from the past!

Janet Pitcher’s costumes are always, well… plaid. I don’t recall The Plaids coming out in plaid trousers in the past, but hats off if it’s a new incarnation. Justin Gray, Piano/Conductor even had his plaid vest on in the second act. Martin Martiarena accompanies on Bass. It’s a dynamic duo!

“Plaid Tidings” is a fun holiday show, one for the whole family. Enjoy. 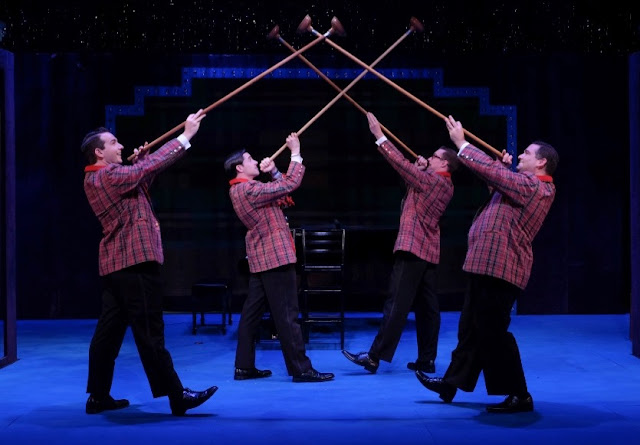 
Photo: Ken Jacques
Posted by Carol Davis at 8:29 AM