“Hedwig” crosses the no fly zone, breaking the sound barrier and lands at Civic.

It’s a bird! It’s a plane! No! It’s the John Cameron Mitchell/Stephen Trask rock opera “Hedwig and the Angry Inch”. It crash -landed at the Civic Theatre on the way to completing its national tour after closing here on the 4th. It just about blew out the entire antiquated sound system and ruined my hearing for a day.  OMG! What were they thinking? Even my hearing aids, operating on their own, started vibrating in my purse.(Tim O'Heir)

“Hedwig’ is not for those of queasy stomachs. His/her story, convoluted as it may be is told through the use of projections (Benjamin Pearcy for 59 productions), song and dialogue. You might even be familiar with some: "Tear Me Down", "Sugar Daddy", "Angry Inch", "Wig in a Box", "Wicked Little Town", "The Long Grift", "Hedwig's Lament", Exquisite Corpse". The show runs about 90 minutes with  no intermission.

The original production of “Hedwig” started in small houses Off- Broadway in 1998 and won the Obie Award and Outer Critics Circle Award for Best Off-Broadway Musical. In 2014 the show was remounted taking away a prized Tony for Best Revival of a Musical.

About thirteen years ago the then fledgling Cygnet Theatre that was located where the now Moxie Theatre lives, mounted “Hedwig” to critical acclaim. Even then it was somewhat of an anomaly.

Though not for all, this high-energy evening tells the tale of a sensitive young girl/boy, Hansel Schmidt born in East Germany, longing to be a rock star. He is in search of his other half (“Origin of Love”) only to find his true love in the form of an American soldier, Luther Robinson, who promises to take the boy to the states.

There’s a big IF, however: He must become a She!  The operation is botched during the sex change and the instead of having a vagina, (ready for this one) a one inch surgically stitched mound of flesh is the only remaining sex organ Hedwig has to his name.

As you might imagine all was not ‘that heaven allowed, Dorothy’ after they landed in Junction City, Kansas. Yes indeed, things go from bad to worse with Luther abandoning Hedwig on their first anniversary.

With text by John Cameron Mitchell and music and lyrics by Steven Trask, the story unfolds with over the top prancing by the high energy Euan Morton (taking over the role for this tour) who is in the drivers seat all the way. Local references and some stand up comedy along with audience participation are meshed together in this mish mash of a show.

Bring in the frustration and admiration Hedwig deals with in the form the success of Rock Star Tommy Speck a young boy he befriended, idolized and collaborated with in music and lyrics at the beginning of their relationship. Most of what they worked on together made Tommy a great Rock Star, leaving Hedwig only to stand in his shadow and listen to the roars from the stadium on the other side of a sliding door.

Much of the music I could not understand. But the over the top vibes from the Angry Inch Band (that Hedwig created), the saga continued to the bitter end. Throughout Tommy is much more successful than Hedwig and we know this because we hear the crowds every now and then when the door id opened.

The story notwithstanding, Hedwig deconstructs himself (“Hedwig’s Lament”/Exquisite Corpse”) and finds peace with another misfit, Yitzak (a gifted Hannah Morton), his man/woman sidekick who aches to be a woman. (“Midnight Radio”)

I can’t say that all’s well that ends well in this sad little ditty except for the fact that a smaller venue might have improved the entire experience. 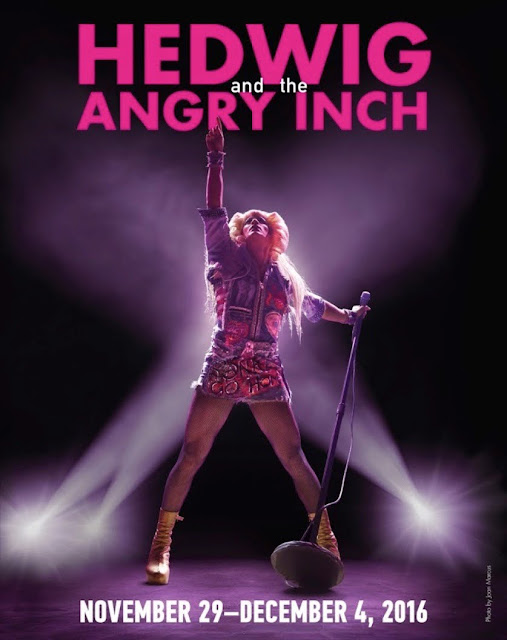