“Cinderella” shines as San Diego Opera give us an October Surprise

San Diegans who follow the opera every year can almost count on the season to begin in January. Think again. This year, as our October Surprise, we are being treated to the San Diego Opera’s Premiere of Rossini’s 17th century fairy tale, “La Cenerentola” or Cinderella.

Anyone who’s ever read the fairytale story or seen the Disney movie based on the 1812 Grimm Brothers version, or been to 'Cinderella on Ice' (“Dare to Dream”), about the rags to riches, abused and envied by her arrogant step sisters will be quick to recognize all the characters in Rossini’s Cinderella. Its lightweight but a somewhat darker version of what Charles Perrault’s 1697 penned. He included the pumpkin, glass slipper and fairy godmother to make the magic happen.

Most of what we remember in this version by Rossini’s librettist Jacopo Ferretti has most of the usual characters. A few gender and minor changes (no glass slippers, identical bracelets instead come to play at the palace ball) and the Prince’s wise teacher Alidoro makes it possible for Cinderella to attend the Ball. Bye, bye to Fairy Godmother and magic wand and hello Alidoro.

Scenic designer Don Potra’s set opens to the library in the Prince’s quarters where the Prince is getting ready to look at some of the candidates chosen for him to consider as his Princess.

Soon the floor to ceiling book shelves open on to the beautifully appointed emporium, if you will, with living quarters above for Don Magnifico and his daughters. Later we get to experience lavish gardens where the Prince and his servant Dandini (Baritone José Adán Pérez) play out the waiting game as to which daughter the Prince will choose. Potra also designed the lush looking costumes highlighted by Matthew Marshall’s brilliant lighting.

The wicked stepmother now is the nasty old man and pompous stepfather Don Magnifico (Bass Stefano De Peppo) who comes across as obnoxious and frightening drunk but his voice doesn’t suffer. The two vulgar and self-obsessed stepsisters, Clorinda (Soprano Susanna Biller) and Tisbe (Contralto Alissa Anderson) are just as insufferable and equally as comical and yes, in fine voice.

Let’s not forget the Prince Don Ramiro. Color him charming (tenor David Portillo), playful and quite a catch for his beautiful and delightful Cinderella/Angelina (Soprano Lauren McNeese). The emotional connection between the two is more than convincing giving this romantic comedy as much credibility as needed. (“She/He is delightful, he/she is enchanting. All my senses now beguiling, ah, how sweetly he/she is smiling.”) 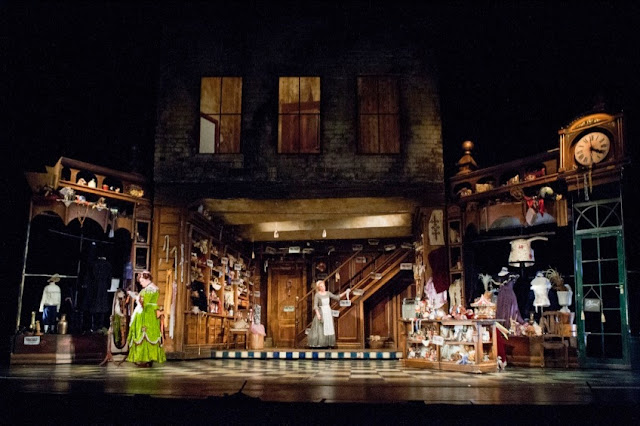 Some might find it frivolous. Others may balk at it because its not Verdi or Puccini. Most will  delight in Rossini’s recitative numbers for Alidoro, "Vasto teatro è il mondo", Clorinda's "Sventurata mi creda" and the chorus "Ah, della bella incognita").

Overall, it’s a great way to welcome in the season. It’s fun, entertaining and well worth the trip downtown.