“The Lion King” has been and always will be a musical wonderland, a visual starburst of colors with a Fourth of July dancing parade of animals set against a background that comes from a Disney animated film that was later made into a 1997 Broadway mega hit.

This powerful combination of show business and film captures a story woven together with a savory message of peace and love for young and old. The story moves from hope and despair, faith and love to Hakuna Matata (‘no worries for the rest of your days’) with an incredible array of talent.

From the youngest of the young Samba’s to the amazing Shaman Rafiki (Buyi Zama) to our very own home grown Nick Cordilone as Timon the meerkat. (He’s the all green one) the talent pool runs deep. And lest we forget Zazu the red- billed hornbill, expertly navigated by Drew Hirshfield to the smelly Plumbaa (Ben Lipitz) and on and on to Mufasa, King of the Rock (Gerald Ramsay) and Sarabi (Chondra Profit Ardrey) his mate. One must in this context mention Scar, Mufasa’s twisted brother a bit overplayed by Mark Campbell.

The story follows Simba as he makes a series of mistakes (by not listening to his Dad) and falls instead under the spell of his uncle Scar and visits the Elephant Graveyard, a place set off limits by his father, now homeland to the hyenas that live there.  He is sent away from his birthplace by Scar and after a series of missteps Simba runs into the good, the bad and the ugly as he matures to take his rightful place on Pride Rock.

His guardian angel, if you will, is Zazu. Zazu tries to steer him in the right direction. But as soon as his back is turned Simba strays into unfamiliar territory until he meets up with Pumbaa the Warthog and his sidekick the skittish Timon who take Simba under their wing. (‘Hakuna Matata’)

Add a little romance as in Simba and Nala (Aaron Nelson and Nia Holloway) who played as children and get separated in the jungle, find each other after they are grown and you have a pretty complete story with one exception, Rafiki (Buyi Zama) as amazing as the storyteller and soothsayer is the glue that holds the story together.

Her voice is marvelous with clicks and chants; “Nan Ts’Ngonya Ma Bakithi Baba Sithi Hm Ingonya Ma” “This way a lion comes”. She opens the show and closes it, and you will never forget her presence. Credit her chants to Tsidii Le Loka.

This is the third time Broadway San Diego has hosted the show and my guess is that as long as there are starry- eyed audiences from eight to eighty, it wont be the last.

It made its national tour in 2002 and before and after the national tour, the show has been around the world and back. It has won seven Tony Awards including Best Musical, Best Choreography, Best Direction of a Musical, (Julie Taymor), Best Original Score (Elton John and Tim Rice) Best Costumes, (Julie Taymor and Michael Curry) and on and on. And those are just the Tony’s.

Much credit for the success of this show is due to Julie Taymor. She not only directed the original and is also responsible for the colorful and vivid costume designs including the masks and puppets (with Michael Curry). This one of a kind show is not to be missed not even twice or three times.

This current run is as amazing as if seeing it for the first time. Jaw- dropping and eye popping are regular occurrences from audience members as the ‘animals’ parade down the isles. I kept an eye on my eight -year old grandson sitting next to me and almost became teary he was so in awe. 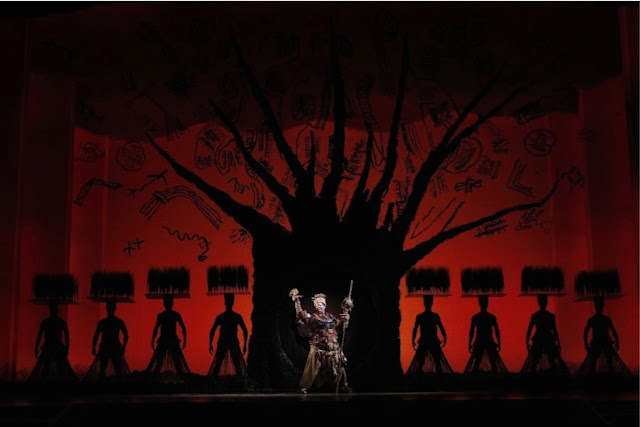 We’re talking bigger than life sized animal puppets (there are more than 200 puppets in the show including rod puppets, shadow puppets and full sized puppets) all being generated by real life sized actors inside and out of these characters. Elephants, antelope, giraffe’s, birds, zebras, and the list of characters are non-stop as they parade past the audience toward the stage. It is one of the most dazzling scenes yet. *

After seeing it again for the second and third times, I could appreciate the message and the great Elton John/Tim Rice score and lyrics. Additional music and lyrics by South African Lebo M, Mark Mancina, Jay Rifkin, Julie Taymor (“Endless Night)” and Hans Zimmer include musical from  “Rhythm of the Pride Lands” using both Western and African music, which is often more physical, immediate and repetitive than some of the more traditional music heard.

The chanting, the colorful costumes and the great sounds coming from Robert Elhai and David Metzger under conductor Jamie Schmidt with Stefan Monssen and Reuven Weizberg on either side of the orchestra on a platform in plain view playing on percussions adds to overall feeling of being in Africa.

All make this a one of a kind show not to be missed even by cynics like…well. Add to the outstanding dancing with Garth Fagan’s energetic choreography, Steve Canyon Kennedy’s sound design, Michael Ward’s hair and makeup design, Donald Holder’s lighting (everything the light touches) and you have a smile from ear to ear wondering if what you just saw was real.

Can You Feel The Love, Circle of Life (It’s the circle of life and it moves through us all through despair and hope, through faith and love) to Hakuna Matata.

Yes, we felt the love.

*There are 12 kites in the opening number
There are four African dialects spoken in the show: Swahili, Zulu, Ghosa and Soweto.
The tallest animals in the show are the 18-foot exotic giraffes,
The tiniest animal is the trick mouse at the end of Scar’s cane: 5”
The longest animal is an elephant: 13’ long, 11’3” high and 9’ wide at the ears.