Sum total of parts light up the night with Globe’s “October Sky”.

The play is set in Coalwood, West Virginia 1957-1959. Coalwood, as the name of the town implies, is a coal-mining town and its residents for the most part are coalminers. Juxtaposed by the events in history when in 1957 Sputnik 1 was launched and crossed the October Sky over Coalwood, WV, our story plays like a push me pull you battle for the future.

When the miners open with  “To The Mine”, “Never Getting Out Alive” and Homer (Kyle Selig) counters with “Look To The Stars”, the beginning of this battle that runs as deep as the mines is already developing. “You Are What You Are”. (John)

“October Sky” fits beautifully into Kevin Depinet’s awesome and inspired set. We watch as the mine’s elevator surfaces as the day shift miners ascend. In other scenes and other shifts they are swallowed into the elevator shafts disappearing into the tunnels. Overhead is a huge arc of dilapidated railroad tracks stretching across the proscenium, hinting the cars that pull the men to the various veins.

The set is eye-popping, the orchestrations by Bruce Coughlin along with the nine member band under the baton of Charlie Alterman, the projections by Shawn Sagady, the lighting by Japhy Weideman and Garth Helm’s sound, Markus Maurette’s special effects (Oh those rocket launches) and Linda Cho’s period piece costumes along with a strong supporting cast of wonderful voices and outstanding acting give this piece the feel of a Broadway show. 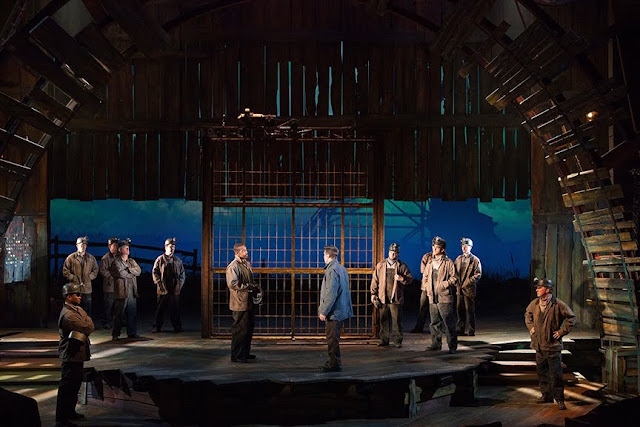 I was drawn in hook, line and sinker from that opening number to the final lift off of the coveted rocket that ended with a first place medal (along with a scholarship) at the National Science Fair in Indianapolis for the three lads that worked on the project with Homer: O’Dell (Austyn Myers), Roy Lee (Patrick Rooney) and Quentin (Conner Russell).

This eventually would lead to a new career at NASA in 1981 (as an aerospace engineer) for Homer Hickam, Jr. whose signature song in the musical, “Look To The Stars”, became his personal anthem in his quest to build a rocket.

Based on the true story (“Rocket Boys” the book/memoir and “October Sky” the movie) Homer Hickam’s journey unfolds tracing his last years in high school and the village it took for Coalwood to be recognized as a place where coal was mined and rockets were launched.

Homer’s story is on a new path with “October Sky” the musical. This is only its second outing away from the movie version. It premiered at the Marriott Theatre just outside Milwaukie, Wisconsin. There are musicals and there are musicals.

The creators of “October Sky” have a great thing going with the authenticity that’s being driven with some excellent music and lyrics, filled with emotion and humor, conflict and satisfaction, excitement and trauma, love and trust.

Working with a large and talented cast director/choreographer Rachel Rockwell’s view of the big picture is one of coherency and fluidity. Scenes move quickly and seamlessly.

Kyle Selig, founder of  ‘The Rocket Boys’, is most believable as Homer the advocate, respectful of his parents yet willing to put his status as the good son on the line. Kerry O’Malley is what every young person would want as a parent. She is soft, but mighty, loving but fierce when it comes to protecting her young’uns and faithful but brutally truthful with her husband.

Sandra DeNise, Homer’s chemistry and physics teacher, Miss Riley is Homer’s inspiration urging the boys on to compete in the Science Fair. One might say she is the boys’ biggest advocate. Miss DeNise has a beautiful voice and is more than convincing as his friend and teacher.

Last but not least on the female side of the equation, in the almost thankless role of the overlooked girlfriend Dorothy, Ms. Palasz fits the bill holding back a la 1950’s by playing coy. The three women are on top of the game with “The Last Kiss Goodbye” It about sums up their admiration and love for Homer. All the female voices are gorgeous.

Ron Bohmer plays John close to the vest as the steel minded, hardheaded mine foreman and Dad. It’s unclear why he is so against his son wanting to leave the mines. He comes across as angry, sullen and a spoiled child and it takes a warning from his wife to get to know his son or else he’ll be bacheloring it for some time to come.

Jim (Liam Quealy), Homer’s older brother pretty much get a pass from his father because he is BMOC on the football field. All the other Rocket Boys, Austyn Myers, Patrick Rooney and Conner Russell are shown in varying degrees of teenage playfulness, or lack thereof as in the case of the outcast, but brilliant Quentin.

Following the story’s trajectory has its ups and downs and oft times it struggles to get it just right the first time and so it repeats itself, a minor problem that will be worked out as the authors look closely at the book.

No doubt they will and will find ways to cut some of the story back or perhaps eliminate a song or three.  There are about 25 of them and some are reprisals. Most notable is the music that pays homage to the region, “with shades of bluegrass, Appalachian folk music, a Jug Band on stage (“Moonshine”) and sweeping Americana of Copeland… and some sounds of the beginning of rock ‘n roll.”

“I tried to give the characters in this story things to sing that were essential. “ M.M.

There’s a lot going on in “October Sky” but none can fault the rocket makers, because in the final analysis a rocket is launched (“We’re Gonna Build A Rocket”) from a platform in Coalwood, W.V. and short of a trip to Cape Canaveral, we all saw it happen and you can too.