“Cabaret” on the dark side.

I’m not quite sure if I ‘linger for the old time throng”, but this new Roundabout Theatre Company’s Tony Award winning production of one of my most favorite Kander and Ebb musicals, “Cabaret” almost bears no resemblance to Joel Grey’s “Cabaret”. That’s not a bad thing, I just haven’t decided whether or not I’m yet in that camp.  Let’s just call it a different twist on the same theme and yours truly is sitting in indecision (a place I find myself in lately).

Some will refer to this current rendition and national tour (of the Sam Mendes, Rob Marshall, Joe Masteroff’s book based on John Van Druten’s play “I Am A Camera, which was inspired by Christopher Isherwood’s 1939 portrait of Sally Bowles in “Say Goodbye to Berlin”) now at the Civic Theatre through the 28th as an update to meet and attract present day audiences; I’ll call it a dark, yet more realistic and frightening. 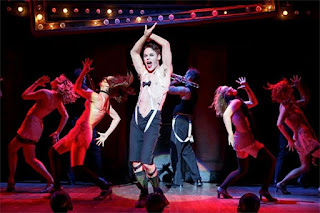 When the movie version, under the watchful eye of director Hal Prince with music by John Kander, lyrics by Fred Ebb and book by Joe Masteroff came out, the overall look was one of a big Hollywood musical having Sally Bowles fit the now image of a Sally Bowles and the Kit Kat’s singing and performing in a Cabaret and the Cabaret becoming a metaphor for the declining Weimer Republic. It forever memorialized Liza Minnelli as the Ex-patriot Sally Bowles and Joel Grey as the Emcee of the Kit Kat Klub.

“Cabaret” won eight Tony’s in 1966, eight Oscar’s in 1972 and with the re-imaged Roundabout Theatre’s production in 1988 four more Tony’s were added to the collection. In 2013 the update ‘was brought to another generation of Broadway Theatre goers’. ‘All showbiz sheen and sparkle have been stripped away’ according to Roundabout’s artistic director Todd Haimes.

It’s a story that quickly lures us in to the decadent world of pre Nazi Germany where drugs, sex, prostitution, abortion, homosexuality, and conspiracies lurk under every cabaret table. (Not actually seen in this production) Then it methodically whacks us over the head when those same characters of the infamous Kit Kat Klub of ‘Cabaret’ fame begin to feel the squeeze of Hitler’s madness, live in denial of it (as so many others did) and suffer the consequences from it.

Sally Bowles (Andrea Goss in fine voice “Maybe This Time”) is the prime example. Ex patriot Sally and her  romance, on again, off again with American writer Cliff Bradshaw (tall and lanky Benjamin Eakeley) is based solely on the preposition that everything’s OK until Cliff begs her to ‘read a paper!” She’s eccentric and impulsive and he’s in awe. He is persuaded to stay with her suppressing his homosexuality (that is more in the open in this update) and falls hard at her irresistibility and vulnerability thinking in the end that he can save her from herself.  (“Perfectly Marvelous”)

Underlying themes of gender bending, illicit sex, anti Semitism, nationalism and corruption are played out tragically between the players Fraulein Schneider an excellent Shannon Cochran) and Herr Schultz. (Mark Nelson is wonderfully nuanced and always dignified even when the world as he knew it was crumbling beneath his feet.)

Their budding romance lends a soft sweetness to the entire hard edge of the show especially with his endearing “It Couldn’t Please Me More /“Married”. When this subtle love affair leads to a proposal of marriage, it finds itself one of the first causalities of the Third Reich’s  ‘Jewish Problem’  (“What Would You Do?”)

The omnipresent Emcee (Randy Harrison) is not  your Joel Grey character that starts us off with the all too familiar “Wilkommen” by any stretch of the imagination. This Emcee is in the eye of the storm dressed in black storm boots, suspenders placed wrapped around his crotch holding up his half zipped rolled up tuxedo pants, bow tie and bare chested. His red lipstick covers his mocking, know all sleazy smile and after a fashion ‘Moons’ us showing his Swastika tattooed behind, never imagining that he too will end up where all the perverts, Jews, Gypsies, homosexuals and non Aryans end up, behind barbed wire. (“I Don’t Care Much”)

Off in the distance Ernst Ludwig (“Tomorrow Belongs To Me”) brings the ‘axis of evil’ home by laundering money for the Nazi cause, a job for which he enlisted the naïve Cliff Bradshaw. And by the time the Emcee “If You Could See Her” duet with the lady gorilla which ends with … ‘she doesn’t look Jewish at all’, the dye is cast for the Kit Kat Boys and Girls, Herr Schultz and, in an emotional and completely unexpected finale, a shock wave filters through the audience.

There is no lack of talent and energy in this touring company with Andrea Goss, Randy Harrison and Shannon Cochran coming straight to San Diego before it heads east.  Shout out’s to Robert Brill’s minimal set design, William Ivey Long’s costumes, Peggy Eisenhauer and Mike Baldassari’s excellent lighting, Michael Gibson’s orchestrations, Cynthia Onrubia associate choreographer and BT Mc Nicholl’s direction. All the Kit Kats that were part of the band added to the ensemble of dancers and characters.

Each time I see this show, and I’ll save you the litany, I am amazed at how much I love the music and the message: ‘Never Forget’.