Moonlight’s production of “Titanic” is Yuge!

Moonlight Productions has taken on a project as yuge as the ‘Titanic’ itself, the ‘unsinkable’ ship that went down to the sea after hitting an iceberg on its maiden voyage crossing the Atlantic on April 14th 1912. To say that some of the most elite of the elite was aboard would be an understatement. More on that later 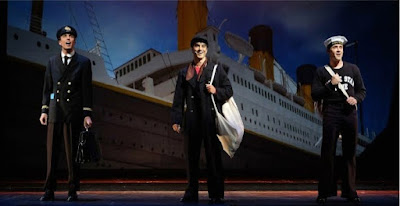 The musical with story and book by Peter Stone and lyrics and music by Maury Yeston (who manages to give a small look into several of the many characters aboard), is one of the largest shows Moonlight Productions has loaded in on to their stage. It also won five Tony’s in 2016 one including Best Musical. On some level it plays like an operetta and with the  help of a 26- piece orchestra under the baton of Elan McMahan it soars. Under the deft direction of Larry Raben and cast of about 38 with some doing double duty, it is a sight to see.

Roslyn Lehman, Renetta Lloyd and Carlotta Malone coordinated the many costume changes (Theatre Company) Jean-Yves Tessier’s lighting design, with an effective three level set (provided by Gateway Set Rentals), Jim Zadai’s sound that was awesome, but the piece de resistance is Jonathan Infante’s projection designs. They make this behemoth of a project move forward with what looks like little effort (which we know is not), especially in the final scenes when the listing ship is ready to go down. Bravo!

As for the cast, it is one of the strongest ever with mighty voices mostly coming from the large male ensemble including Norman Large as the Captain (E.J. Smith) and Johnny Fletcher’s Officer 1st Class William Murdoch.  Others include Richard Bermudez as the first stoker who is a standout, and long time no see Joseph Grienenberger as Henry Etches, 1st Class Steward and Bryan Banville as lookout Fredrick Fleet, (and others). 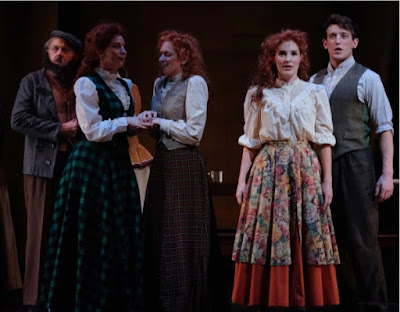 Robert Townsend (“Mr. Andrew’s Vision”) is Thomas Andrews the architect that designed the Titanic, Steven Glaudini (artistic director of Moonlight Productions) portrays J. Bruce Ismay, Chairman of the Board of White Star Lines and self centered egotist, that some thought was the cause of the ‘accident’ by pushing the Captain to increase the speed in order to set a world’s ocean crossing speed. (“The Blame”) The talent goes deep making Yeston’s music and lyrics so compelling.
I would be remiss if I did not mention Ralph Johnson in this tribute. Johnson stood as a man of compassion portraying Isidor Straus, humanitarian and co-owner with his brother Nathan of Macy’s Department store fame. But it was the lasting love affair with his wife Ida (a lovely and composed Susan Stuber) that captured the hearts when she refused to get on the lifeboat without him. (“Still) They lived together, loved together and would later die together.

And while the story has many moments like this, this one in particular, whether factual or not, brought tears when he wrapped his Champaign glass in a napkin and broke it as he did on their wedding day. Chills even now (nice touch). It was touching and heartfelt amid the chaos of the other passengers vying for an escape route. 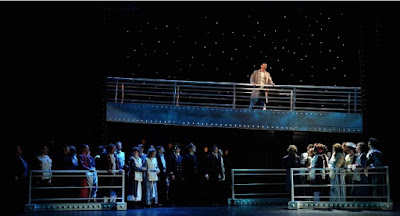 Bringing a little humor into this darkness social climber Bets Malone and Greg Nicholas as Alice and Edgar Beane from Second Class go back and forth about Alice’s need to meet up with and mingle with the first class set. (“The First Class Roster”) She makes commentary on each as the names are read, by third class officer Pitman (Evan White) when each boards. She also manages to infiltrate the upper deck, “I Have Danced” much to Edgar’s chagrin.

Adding another touch are the three Kate’s (Katie Sapper, Shaina Knox and Sarah Errington) and a love interest, Jim Farrell (Scott Arnold in a most convincing role) from Third Class. All hail from parts of Ireland. Hats off to choreographer Karl Warden and with his added choreography.

We all know that the cream goes to the top and that’s about how it was on The Titanic. Those in First Class had every opportunity in life. J.J. Astor (Paul Morgavo), Benjamin Guggenheim (Theodore Leib), John Thayer (Sean Jeffrey Barnett) and family, George Widner and wife, Eleanor (Debra Wanger), and were the first passengers given the limited number of lifejackets while those in Third Class were all but kept to their own as the ship took on water.

Impressive also was the company’s heartfelt Finale. Their voices shook the Amphitheatre.

It’s not easy watching a show based on the tragic facts surrounding the sinking of what might have been a glorious hour and years of talk for those involved as passengers and those responsible for the idea, design, construction and overall inner workings of “The Mighty Titanic”.  (“How Did They Build The Titanic?”)

Instead, as the roll call of those listed and deceased (1,500 men, women and children) rolled on the closing curtain one could feel how lucky the one passenger, Frank Carlson who missed the boarding, must have felt when all was said and done.

You still have time to catch this seldom produced show through Sept. 3rd. It’s a good investment of your time and another look at a moment in history not seen in movie theatres.