“Junk: The Golden Age of Debt”: “A story of kings or what passes for kings”

“It’s all about the money”. “Follow the money trail”. I can’t even think of all the times I’ve heard those phrases. In Ayad Akhtar’s world premiere production of “Junk: The Golden Age of Debt” now at The La Jolla Playhouse through Sept. 7th.  This money trail is bit different, but it still boils down to the absolute power of money and how it breeds greed, corruption and fraud! 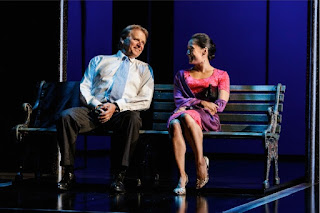 Most of us avoid debt like the plague, yet ask anyone in debt and the shrug of an answer you may get implies ‘everyone is in debt on some level’. In “Junk” the playwright isn’t talking some debt, he’s talking BIG corporate takeover as in Junk Bond Debt.

Creative investor’s used this process in the mid 80’s (not that similar schemes haven’t been used before but not on such a large scale) to create humongous profits for themselves while leaving others in deep dodo debt, sending many into bankruptcy, suicide and or prison. Think crook Bernie Madoff but before that think Michael Milken, the “Junk Bond King”. Actually both crooks.

Akhtar’s “Junk” is pretty inclusive in its scope naming by implication and association but not actually calling by name all the players and how they played a part in the scheme of buying ‘junk’ or getting deeper in debt (which at the time was a ‘good’ thing) to raise capital quickly in order to finance the takeover of another business or conglomerate.

In ‘Junk’ the entire first act (there are 2 and ½ acts) sets us up with the scheme and the players. And while director Doug Hughes’ production is sharp as a tack and the large ensemble is clearly articulate in outlining the process, the fast changing scenes in the too long first act simply flew by me and it wasn’t until the second act that the ‘junk’ concept fell into place. I’m sorry I slept through that financial upheaval of the 80’s but with no one wanting anything I had, it was easy. It sort of reminded me of the movie “The Sting”: “The Players”. “The Tale”. “The Set Up”. “The Hook”. “The Sting”.

“Junk” unfolds in front of our eyes when the big guns, ‘The Raiders’ or Players include Robert Merkin (Josh Cook), Raul Rivera (Armando Riesco), Israel Peterman (Matthew Rauch) and Boris Pronsky (Jeff Marlow). They want to buy out Thomas Everson’s (Linus Roache) family owned and operated for three generations Steel and United. He was a proud man who treated his employees with respect. Everson is one of the more developed characters in “Junk” and Cook plays him like a violin.

Clearly, Everson isn’t what in some eyes looked like small potatoes. His was a manufacturing behemoth and still member of the Dow Industrial Average. But times and conditions pushed his company to diversify. That said, when it was learned that he needed money to help his business out of debt and keep his workers employed, he was pretty blindsided when the guns swooped down on him and pressured until they broke him.

His friends, investment banker and advisor Maximilien Cizik (Henry Stram) and Jacqueline Blount (Zakiya Iman Markland) a lawyer at Cizik’s firm along with Leo Tessler (David Rasche) were there for “The Setup”. They were the go between.  Outside his circle Giuseppi Addesso U.S. Attorney of New York (Benjamin Burdick) and Kevin Walsh, (Keith Wallace) Ass’t. U.S. Attorney of the fraud unit were in on “The Hook”.

They set up “The Sting” to bring Merkin down but not before everyone involved dirties their hands including Addesso, whose character resemblance to Rudy Giuliani is about as close to real as Merkin is to Milkin.  Add Judy Chen, (Jennifer Ikeda) a young up and comer writing her own account of the big guns manages to catch the eye of Tessler. Watching that little romance develop was probably the lightest of moments in the play but Akhtar still manages to bring out the sexism that existed then (as now).

Amy Merkin (Annika Boras), Merkin’s wife is his co conspirator but she’s a bit smarter in the finances to his more ballsy aggression in the working of them. A few minor characters that serve at the wishes of their boss’s float in and out, giving a broader spectrum to the details. That’s pretty much the whole ball of wax. How it plays out on a day-by-day operation and the conversations that propel it, give Akhtar a leg up in this messy business of explaining it.

It would be foolish to ignore what Akhtar has put before us in this world premiere. This fictionalized account of real life money matters and the thirst for power is but a drop in the bucket of what brought the banks, big corporations and some very stable institutions to their knees.

A few personal observations: The third act is superfluous and the first act can be shortened. References to Jews (Shylock, shyster, good Jews) and those of the Jewish Faith offended me even though that apparently was norm those days in ways of separating the Blue Bloods from the Immigrants. It still rubbed me the wrong way.

As the big guns outwitted the little guns with their investment schemes along the way and without anyone looking over their shoulders, the disparity in the redistribution of wealth and the loss of good paying jobs is what has this country in the financial bind it is in today and it doesn’t look as if its going away. Stay tuned.