Steve Martin’s world premiere play of “Meteor Shower” a co-production with Long Wharf Theatre is currently playing at the Old Globe Theatre in the Sheryl and Harvey White Theatre. The short 2-act play has been extended to run through Sept 18th 2 weeks longer than scheduled. Friends and acquaintances have been bemoaning that there are no tickets to be had. Perhaps with these additional dates, their wishes for tickets will be granted.

Some might have been stung by the fact that they never got to see his and Edie Bicknell’s “Bright Star” the new musical that premiered here in 2014. It went on to win the Drama Desk Award for Outstanding musical and Tony nominations for Best Musical, Best Book of a Musical, Original Score and on and on. Unfortunately it closed after 109 regular performances.

Martin’s new play is called an ‘adult comedy’. It’s a cross between Albee’s “Whose Afraid of Virginia Wolfe” but this one is sit com funny (in an off kilter kind of way) not Virginia Wolfe’s biting dark humor funny, and this year’s “Constellations” by Nick Payne where every start has an alternative start and twist on the same material, over and over and over again but seen through different eyes and perhaps the lineup of the constellations.

‘Meteor’ does the same thing kind of restarting each scene with a different take on what each character’s motive or perception of what we are about to see will be acted out but doesn’t come close to the straightforwardness and consistency that Payne’s “Constellations” does.

Two of the characters in Martin’s play, Linda and Gerald (Alexandra Henrikson and Josh Stamberg) definitely have a plan of action before they even ring the doorbell to Corky and Norm’s (Jenna Fischer and Greg Germann) beautiful and upscale Ojai home. Maybe they’re heavens sent, maybe not. (Michael Yeargan's set is beautiful and perfect for the theatre in the round of the White Space)

We meet up with Norm and Corky, as they are getting ready to welcome Laura and Gerald. They have a little ritual of coming together and holding hands when one or the other of them hurts the other’s feelings. We see this as Norm makes some off- handed remark about Laura. She’s the one that picked Norm up after he and Gerald finished their tennis match.

Laura and Gerald are visiting under the guise that they want to see the upcoming fiery meteor shower unimpeded by the lights of Santa Barbara, where they live. Maybe. It’s going to happen under the stars this particular weekend in 1993 or so they say. (“Tonight, fifty to sixty meteors are expected per hour”) But what they say they want, what they do and how they go about it puts the audience in a position of defying reality and leaves them scratching their heads for 100 or so minutes. Did it happen this way or that way? Perhaps that was the intent of playwright to keep ‘um guessing.

So let’s rewind that scenario. 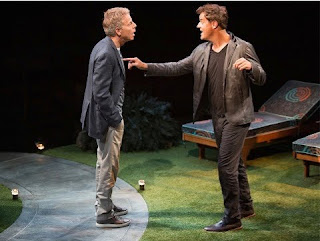 It seems that Corky and Norm want to meet ‘The Coopers’ but don’t really have any way of doing that so when Norm meets Gerald on the tennis courts, he learns that Gerald does know them and will surely make the introductions. (“I think we should meet the Coopers and maybe this is the way”) We learn during the first scenario that Gerald’s wife Laura, the complete opposite of Corky, was once editor of the West Coast Office of Vogue; the now closed West Coast office located in Los Angeles. Was one actually there?

“Oh the games people play now every night and every day now,
Never meaning what they say now, never saying what they mean. La da da da da. Talkin’ ‘bout you and me And the games people play” (Joe South)
And oh, by the way the three Egg Plant gift Norm and Corky got… Who sent that and why only three eggplants? And the wine Gerald and Laura brought as a house gift, was it an $85.00 bottle or a $5.00 bottle? And seriously, who cares, they drank it anyway.

Then the games of you show me yours and I’ll show you mine starts with another rewind of the first meeting.  It seems that Laura was morbidly obese. She lost 250 pounds, Gerald shares. (She has a gorgeous figure BTW). Corky on the other hand was once a cannibal. Yup, she ate her friends while “lost in the Himalayas for 47 days without food, my friend Kathy and a dying Sherpa…and then they were none”. That was a showstopper. Now she admits she has ‘exploding head syndrome’ instead of guilt.

Some of Martin’s comedy is beyond/above my grade level; its too off the wall and just did not tickle my funny bone. Did the audience eat it up the night I attended? You bet they did. Did they LOL? Absolutely. Was the acting worthy? For the most part the actors did the best they could with the material they were given, but frankly my dears, I couldn’t care a damn about any one of the characters.

Director Gordon Edelstein’ s cast is top notch, sit com ready with Jenna Fischer of “The Office” as the straight-laced and pretty boring wife of Norm played to the hilt by Germann, with more facial expressions than one could possibly imagine. He was in the revival of “Boeing Boeing” so that tells us something about his comedic skills. 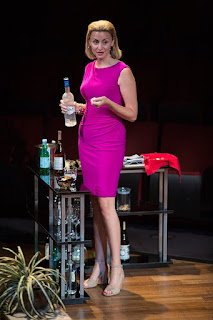 Alexandra Henrikson is a sexpot as Laura. She has all the pursed lips looks down pat and Josh Stamberg is a big hulk of a handsome guy whose big jerk role sets the stage for some rough -and -tumble shenanigans. But then again both couples get to reverse roles and each has a ‘gotcha moment’ so what’s good for the goose is good for the gander.

“Meteor Shower” should appeal to those who love Steve Martin and his humor unconditionally. To those looking for last minute tickets, good luck and keep trying.