“Taming of the Shrew” a noble effort by InnerMission Productions

Two Shakespeare plays that send me over the top are “Merchant of Venice” and Taming of the Shrew”. I know, I know. That was then, this is now. Wrong! Misogyny still exists and anti-Semitism doesn’t seem to want to go away. I was impressed however, with the opening scenes of Inner Mission’s current offering of Will’s “Shrew” as the projections opened on to a screen (blinds) that traced the evolution of the ‘women’s movement’ (sort of) from pregnant and barefoot to men carrying the babies to marching for equal rights to the 19th Amendment to ‘the now women’s movement’ and ‘breaking the glass ceiling’.

All this was for naught however as “Shrew” is what “Shrew” acts, says and does and no matter how loudly she doth protest or how much progress women think they have made, Kate, as in ‘the shrew’ still serves at the feet of her ‘tamer’/master Petruchio. Aarg! Call it comedy if that low ‘comedy’ is your thing, (it is one of Will’s earliest, and has all the elements of his later ‘romantic comedies’ including the ‘happy ending’), we can debate that point later.

InnerMission shares a space with Diversionary Theatre in Hillcrest. One might call it a black box theatre. It is located in back of Diversionary larger theatre. It has no trimmings as such and the seating is very limited and I must add, a bit uncomfortable after a 2-½ hour production. (My friend brings her own cushion.) But “There’s no business like show business” and the show must go on and on it goes as more than a dozen or so brave actors tackle Shakespeare in this lively but uneven production.

In case background info is essential this is the one about the moneygrubber Petruchio ( a very very handsome and commanding Steve Froehlich), who upon arriving in Padua from Verona, discovers that Baptista Minola, (Joel Castellaw) the wealthy Lord in Padua, has two daughters of marriageable age. The eldest is the tempestuous Kate (Kym Pappas). “If I waspish, beware my sting” is quite effective and gets her point across until she succumbs under pressure.

No guy would even consider marrying that one nor is she interested. Her younger sister, the beautiful and forever wooed Bianca (Jamie Channell Guzman) has at least two (that we know of) men wishing to marry her, Hortensio and Grumio (Kevin Six and Kira Vine). Oh and did I mention that gender bending comes with the territory?  Also did I mention the arrival of Lucentio (a good looking suitor indeed Alex Guzman) who also arrives in Padua to attend Padua U? He too is smitten with Bianca.

Oh so many plots and sub plots. But here goes.

Lord Baptista will not let Bianca marry before his the eldest, Kate, is wed. Here comes Petruchio, ‘I’ve com to wife it wealthy In Padua’, to the rescue not so much a knight in shining armor, but rather a gold digger in search of taming the shrew and of course the biggest dowry Baptista can offer. His wedding outfit designed by Alanna Serrano is a kick looking very much like one of  Robin Hood's Merry Men with feathers in his cap and holes in his trousers just to embarrass, while everyone else is dressed in modern street clothes with Kate in a proper wedding dress..well red, but OK. 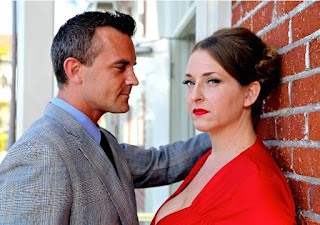 Patruchio has his own way of taming Kate after they are married. He drags her off to Verona, telling all within earshot that she is now his property and may do with her as he pleases. Another AARG! At his house he refuses to allow her to eat or sleep until she is completely broken. Back in Padua the circus of who will marry Bianca continues.

Bringing us in and up on all the news that’s fit to print is the peppy and very wordy and most of the time drunk Grumio (Wendy Savage) who also happens to be Petruchio’s go- to guy er…Several other characters play multiple roles and some are fitting to watch while others are not.

Over all it’s a big play for this small space and Carla Nell InnerMission’s own artistic director gives it her all to make it work. Sometimes it does as in the give and take between Pappas and Froehlich who play off each other quite nicely. Froehlich could tone done a bit; it is after all a small space. The remaining cast members do their best to bring credibility to the plot but the gender bending (confusing at best) and over/under acting gives pause to believe.

If I had my druthers, give me “Kiss Me Kate” based on “Taming of the Shrew” with Cole Porter’s songs any time. It makes the mishegas somewhat more palatable.

In the meanwhile, InnerMission's "Shrew" is still worth a try.