For a lady entering her 70’s the quintessential musical “Oklahoma” is still O!K! It still resonates, the tunes are not only hummable they are committed to memory and anyone that has seen it in the past will conjure up their own memories of the O K L A H O M A! production  number in the second act. 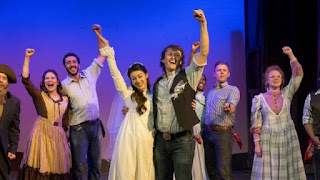 When “Oklahoma!” opened out of town, scouts sent it back to New York with the succinct message: "No Girls, No Gags, No Chance." After the New York opening, the line was revised to read: "No Girls, No Gags, No Tickets.” It ran for 2,248 performances breaking all of the then existing records for length of run and box office receipts. It was 1943 March to be exact, when the book musical “Oklahoma!” opened on Broadway at the St. James Theatre.

With music by Richard Rogers and book and lyrics by Oscar Hammerstein II (the first of their collaborations) the story unfolds in what was then Indian Territories before Oklahoma became a state. It pits the farmers against the cowboys (“Farmer and the Cowmen”) as the basis for the bigger picture. With romance circling the wagons between Curly and Laurie and Will Parker and Ado Annie and Ali Hakim the picture expands and exceeds all expectations.

“Oklahoma!” based on the Lynne Riggs play “Green Grow the Lilacs”, sails or should I say dances and sings its way through one musical number after another with some dramatic emphasis centering around the little ‘off kilter’, mysterious Jud Fry, (“Poor Jud is Daid”), the silly romantic comings and goings of Ali Hakim, the Persian traveling salesman, (a consistent throughout Jonathan Sangster), (Ado Annie who just  “Caint Say No” Alexandra Slade) and Will Parker (Zackary Scot Wolfe).

That love triangle gets a bit tiring after a while but all three actors do their best to keep us interested especially some of the over the top antics of Alexandra Slade’s shenanigans. The on again off again romance of Curly (Jack French) and Laurie (Charlene Koepf), and the cowboy/farmer riff with Aunt Eller (a seasoned Susan E.V. Boland who takes no prisoner’s) refereeing the whole shebang makes for a full and fun loving evening packed with songs like “People Will Say We’re in Love”, “Oh, What a Beautiful Mornin’”, and “Many a New Day”. 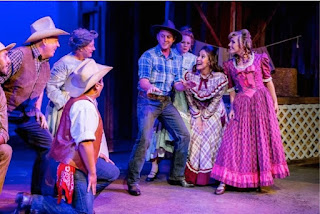 Cowmen and Farmers and their gals with Will Parker

One might not be able to imagine this big show on the long stage of New Village Arts Theatre, think again. Between director Teddy Eck’s staging, choreographer Julian Catano’s ballet and full ensemble of talented dancers, Mary Larson's western looking costumes, Christopher Scot Murillo’s flexible set design and Tony Houck’s musical direction with Morgan Carberry on violin in front of the audience participating in the ensemble or as a member of Houk’s musicians, this lively musical with talent to spare has more energy than the Energizer Bunny.

Full use is made of the stage from one end to the other and Jack French’s Curley, a fresh young new face is as capable as any other I’ve see in the role. Both he and Koepf’s Laurie have great chemistry together whether arguing, singing, dancing or out in the  “Surrey With The Fringe On Top”.
On opening night each showed maturity beyond their years as both have credits to bear them out. I was especially impressed with French’s beautiful baritone voice and Koepf’s rich soprano as they moved together in their duet “People Will Say We’re in Love”.

Coming almost out of the blue, Christopher Lesson’s Jud Fry is a big burly and aggrieved guy, not so much menacing looking as just plain big enough that one would not want to get in his way. That didn’t stop Laurie from confronting him though when she felt him stalking her.

It looked like a David and Goliath moment. Lesson, with it all, also has some impressive chops “Lonely Room” sung with heartfelt emotion (the way he was set up and treated one had to feel some sadness for his character) sung with heartfelt agony and “Poor Jud is Daid” sung with French is pretty gruesomely funny. The ongoing struggle between Jud Fry and Curley, as they vie for Laurie’s attention reaches a predictable yet hokey take on the way the law worked then, just sayin’.

The scenes with Slade’s Ado Annie and Wolfe’s Will Parker are fun. The two are a good pair although some in the audience thought they were in their own living rooms with unnecessary remarks that were distracting. Ado Annie is a plumb comic role and when Annie’s father Pa Carnes (Devlin Collins) brings out that shotgun, hold on to your hats. 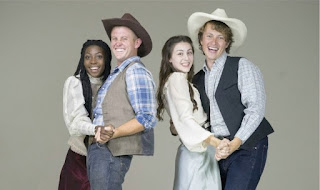 Sue E.V. Boland’s Aunt Eller had her pretty much in charge attitude on on opening night especially with her apron-toting six-shooter at her side. Hat’s off to her; she sings, dances and carries a very big stick.

When the entire cast comes out singing “Okla Homa! “Okla Homa!” We know we belong to the land, and the land we belong to is grand. And when we say Yeeow! Ayipioeeay! Yeeow! We’re saying “Your doin’ fine Oklahoma” - Oklahoma OK. – “O K L A H O M A!”   It is OK.

Put this one on your must see/to do list. You will not be sorry.


All Photos by Daren Scott
Posted by Carol Davis at 11:17 PM